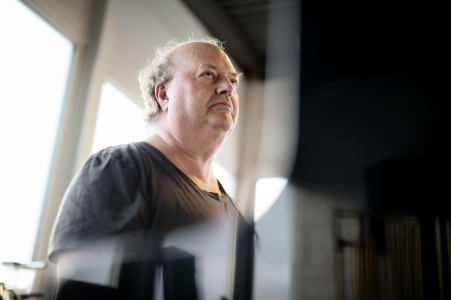 Kenneth Karlsson was born in Åmål, Sweden. He is the pianist and artistic director of Cikada, and a member of improvisation group Point 4. He’s playing in a duo with soprano Elisabeth Holmertz. Together they have formed Vollen Untied, an experimental genre-crossing ensemble, playing baroque contemporary-classical, pop, improvisation music.

Karlsson has toured in Europe, Asia and America, and he has commissioned and premiered numerous works by significant international composers, as well as recording a large number of CDs. In 2001 Karlsson was awarded a Grammy for his solo-CD ”sofferte onde serene” with music by Nono, Berio and Scelsi.

He has worked with video, dance and multimedia projects and collaborated with musicians and composers like James Dillon, Carola Bauckholt, Liza Lim, Bent Sørensen, Richard Barrett, Jon Balke, Ingar Zach, Rolf Wallin, Klaus Lang… In the 80’s and 90’s he was a member of Ensemble K4, Oslo Sinfonietta, Aquarius, among others. He also played in different rock and improvisation groups. Karlsson also plays Indian harmonium and synthesizer.